When you first announce your pregnancy to the world you are bombarded by questions. When is the due date? Did you plan it? (How is this an appropriate question??) Who have you told? Are you going to find out the sex?

I have no idea how it happened but from the very beginning I was completely against finding out the baby’s sex.  Tyler hesitated only briefly before jumping on board. Our family was supportive, for the most part, but they would have much preferred we find out. My sister though was the only one who hated it and let us know!

While a lot of our friends or coworkers, liked the idea of keeping the baby’s sex a surprise most people say, “Oh I could never do that.” They either couldn’t stand the suspense, which I totally understand, or they felt they needed to know to plan for the baby. This I never wrapped my mind around. What do you need to plan? A baby girl and a baby boy need the same things: a car seat, a crib, clothes, diapers, bottles and so forth. Even your nursery’s theme, if you have one, can go a variety of directions. Winnie the Pooh, Disney, travel/adventure, Noah’s Ark- all of these and many more work for any baby. Although if you’re really into monograms, I can see how this would be a problem. I think this is probably a bigger problem in the South than elsewhere. (FYI Haines has the best initials for a monogram. HEB!)

The best grocery in Texas!

There’s more though that I didn’t expect. Knowing the baby’s sex makes them start to take shape in your mind. They go from this concept, this idea where anything is possible to something real, a person. There’s no more pretending. I liked keeping the possibilities open until the moment of truth, until everything changes, but I can see now how it might be helpful at times for bonding with Haines before he entered the world. Many times when I was pregnant I worried that I didn’t feel a special connection to Haines. It’s strange to remember that now as I can’t imagine Haines not being here, let alone not feeling a connection to him.

When Haines was born and they announced “It’s a boy!” to the room it was a shock, although I’m not sure “It’s a girl!” would have brought a different response. There was a baby in the room where there wasn’t one before. It was the biggest change there could possibly be. There were two people in a family and then there were three.

On the practical side, because Haines was still an enigma we weren’t tempted to buy him toys or clothes. It wasn’t quite the same for our mothers, but I suppose that’s not surprising. Tyler bought a tiny bat that he said would be a softball or baseball bat for baby B and I bought two newborn outfits for Christmas. Santa wasn’t coming to find any baby Grinch!  Priorities, right? 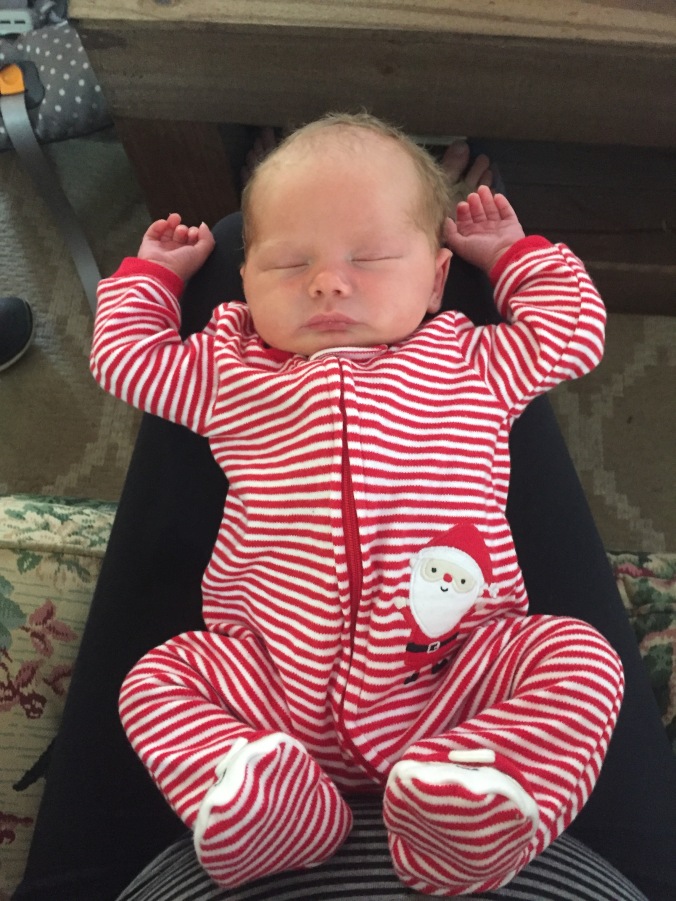 For us, it made everything a little more special, the not knowing. We were entering on a journey that we couldn’t start to imagine and keeping all of the mystery intact was something I don’t regret. It’d be hard to do it again but I loved doing it all the same.

One thought on “To Reveal or Not to Reveal”