My husband hates New York City. As I danced around the house last week singing, “I’m going to New York Ci-teeeeeee” he just shook his head.

This is why he wasn’t invited.

It was a pretty busy trip with overly ambitious itineraries, but we made it through in one piece without our feet giving out (just barely).

In order to hold your interest I’m separating the most important reasons to visit New York City- the arts and the eating.  Next time I’ll tell you about the important stuff: food.

Each of the four days I spent in NYC with my mother had a focus on Broadway or museums.

The first night there we saw Hamilton. If you are thinking about seeing this musical anytime in the next decade, go ahead and get tickets. They’re currently sold out until June 2016. Luckily we got tickets before much press had been released. 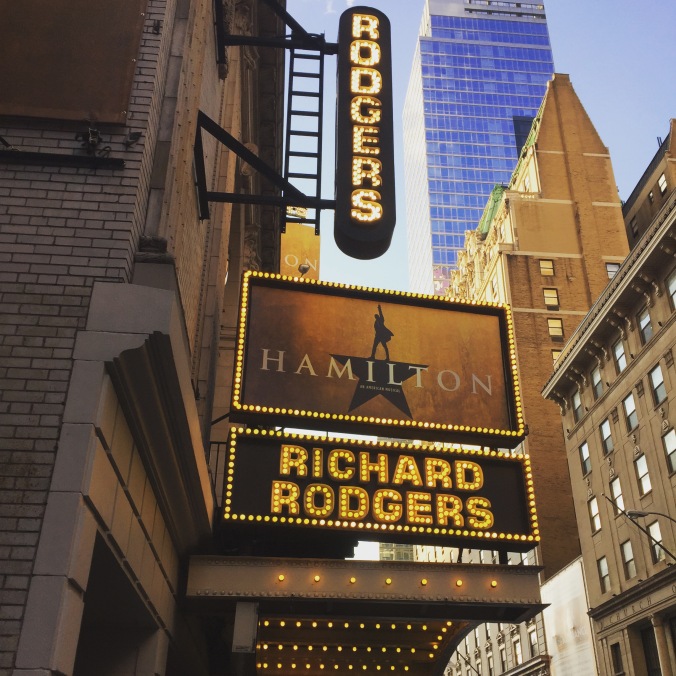 Let me sum up the experience for you. Every positive thing you have heard about this production is true. It will knock your socks off. I sat on the edge of my seat for every moment of the three hour musical. I laughed hysterically. I cried. I was totally overwhelmed.

In case you haven’t heard about Hamilton, let me catch you up. It is the story of Alexander Hamilton from the time he arrives in America at 19 until his death. This sounds boring, but this musical…it’s almost entirely rapped.

The choreography, the raps, the storyline all make the musical great, but I was sold the moment I realized that no character was going to be the character or the villain. No one was glorified and no one was vilified. Every character was fully developed with reasons to hate them and reasons to love them. They were all real.

If you don’t believe me, ask Mo Rocca.

The Curious Incident of the Dog in the Nighttime

I’ll go ahead and admit that I didn’t read the book. I don’t know how I missed it. I remember the summer it was everywhere. I have been told time and time again to read it but it just never happened. So I have no idea if the book and the play radically differed. All I can offer is that my companions had read the book and we all agreed on how we felt about the play. Freakin’ fanastic.

It was beautiful. It was innovative. It was emotional. When we sat down and I looked out upon the strange cryptic set, a floor and three walls that resembled black graph paper, I was skeptical. I had no right to be. I’ve never seen a play that I felt so involved with. There is a scene where it Christopher is below the train tracks at a tube station in London (in this very minimalist set) and the train is coming and the characters are shouting on stage and I am crying and I can feel the people beside me at the edge of their seats. We are all wanting to reach for him, wanting to shout. When that scene passed and I leaned back against my seat, I was exhausted. I don’t think that I’ve ever felt that way in a play before. I’ve never had that moment where reality and the play got blurred, even briefly.

I hadn’t been that excited about seeing this play, but I would recommend it to anyone. It was incredible.

Saturday morning I had planned to walk through Highline Park but we slept later than normal and had a hard time getting going. So after an enormous breakfast we walked an hour to Tenement Museum which isn’t your typical museum. It’s a tenement building built 150 years ago that closed to residents in 1935. Other than a commercial space on the bottom floor, it sat unused until 1988 when it was purchased and turned into what it is today. The focus is on history but you learn a lot about the building as well. When the building was purchased in 1988 the owners realized that much of the building was filled with household items and remnants from well before it closed to residents. They ended up keeping many of the apartments as they were, just peeling back paint and wallpaper to show its layers. They researched the families that had lived there and converted several apartments to resemble those families’ homes. The museum provides guided tours through the building. Each tour focuses on a different family that lived there and the experiences of their people.

We chose the Irish Outsiders tour because of our Irish ancestry. It was interesting to hear about those individuals who emigrated to the New York and thinking about what the experience was like for our family as well. It was equally interesting to learn about the dynamics of tenement housing, the way different neighborhoods developed in NYC and were viewed, and the laws under which all was governed.

This museum was recommended to me by two friends. The only negative of the tour was it wasn’t enough. I wanted to know more. I hope to go on another tour one day. Next time!

On Sunday my mother needed to head straight to the airport in the morning so I was left on my own. When I left the hotel, heading up Fifth Ave, I plugged in my headphones to a jazz playlist. The streets were mostly empty, just a few tourists up early and a handful of joggers weaving around everyone. I stopped to grab a tea and a croissant at a chain bakery I’d seen before. I took a moment outside of Tiffany’s to hum a few bars of Moon River and conjure up a little Audrey Hepburn attitude.

Yes, this is exactly how I looked when in NYC.

Fifth Avenue below Central Park tends to be packed with people. It’s a struggle to get anywhere. Once you’re walking beside the park, under the shade of the trees, it’s wonderful. It brings up all the fantasies I used to have of living there. The buildings are grand and when the doormen come out to the sidewalk it as if they have stepped out of another time with their hats and coattails. 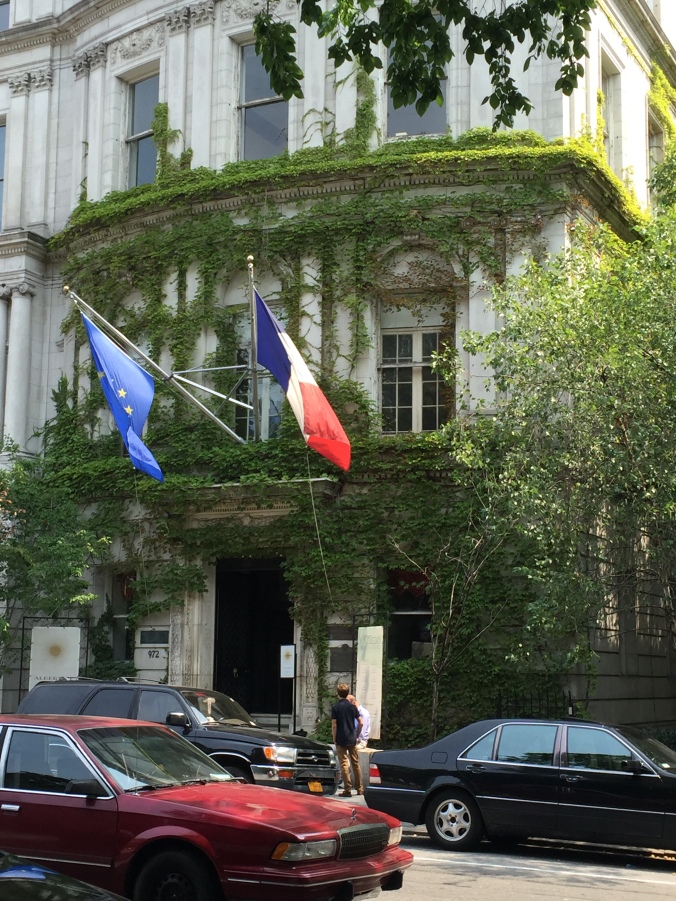 I took my time on this journey, admiring every ivy covered wall and intricate sculpture. When I arrived at the Met, it wasn’t quite ten so I waited with everyone else for the doors to open. This is the time to go. Yes, I sat in the sun for fifteen minutes, but when the doors opened I was the first person to buy admission. And for a brief hour or so, when I walked into some of the galleries I was the only person there. Heaven.

The Met building is reason enough to visit. Forget the art! (Just kidding.) Standing in the Roman and Greek sculpture hall, I felt overwhelmed with emotion.  The marble walls, the arching ceiling, the brilliant light, being surrounded by the world’s most beautiful treasures… How do people work there? How do they focus on anything?

Due to my chronic paranoia that I will be late for my flight, I only gave myself three hours there, which was a terrible decision. I spent the last hour rushing around trying to see the things I was most interested in and constantly getting distracted by other beautiful, striking pieces. I recommend a five hour minimum.

What an incredible thing it must be… to live in a city where you can visit such incredible artifacts and beauty whenever you please.