I think everyone who moves away from their hometown probably experiences a little bit of homesickness for the traditions and culture they grew up with in the holiday season. I am no exception. If I was in Winston-Salem right now, it wouldn’t be much colder but we could at least talk about the possibility of snow. Keeping with the Moravian traditions of our town’s founders (well, Salem’s founders not Winston’s), every night I would see windows lit, each with a single candle. Many a front stoop would be decorated with a lit Moravian star. 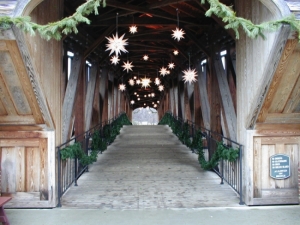 In case you’re unfamiliar (and most people are) Salem was built back in the day (think bonnets) by members of the Moravian Church (a Protestant sect of Christianity). Many of today’s residents of Winston-Salem are also members of the Moravian church. I am not nor did I grow up in the Moravian church but I was lucky enough (as most Winston children are) to be exposed to their traditions and culture in my childhood. There was normally an annual field trip to Old Salem to visit the original, still used town site. I went to day camp at Five Yesterdays, which taught children about what it would be like to live in Salem at that time. (I was sold until I understood what it would mean to wear all those layers of clothes on a hot summer day. I’ll keep my shorts and air conditioning, thank you.)

Throughout the year, we would learn bits and pieces about Salem history. In the fall, we’d take a walk through God’s Acre. In the summer we’d celebrate the Fourth of July at the town square. But at Christmas, signs of Moravian traditions were everywhere. Not only were the Moravian decorations commonplace for many town residents, but also going to a Candletea or a Lovefeast. In my parents’ house a Christmas never passed without a sugar cake in the morning, Lovefeast bun sandwiches with the leftover turkey, and a long discussion about why Moravian coffee is so delicious. Moravian chicken pot pies for dinner and ginger spice cookies for dessert… and snack… and breakfast… and again. Actually, I really like the sugar ones too so I’ll need some of those. Waiting in line at Dewey’s Bakery is a requirement for the holiday season.

If I was in Winston now I’d be trying to decide if the line for Tanglewood’s Festival of Lights was worth it. I’d be creating complicated ways to avoid driving on Stratford or Silas Creek Parkway for the next three weeks. I’d be trying to convince myself that only one sugar cake was really necessary although I want three or four.

With much regret, I will not be visiting good ol’ Winston for the holidays this year. Don’t worry though! I’ll be placing my order for Dewey’s goodies with my parents soon enough. Better bring an extra suitcase….